Continental Landscapes has been working with Westminster City Council since April 2000 and our partnership with them has gone from strength to strength. 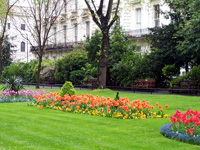 We originally won the grounds maintenance contract for the north of the City with a five year contract, which was extended for a further two years. As a result of the high standards we achieved in the north, on re-tender in April 2007 we were awarded the contracts for all Westminster City Council’s parks for an eight year period. We maintain 109 sites across the City from Queen's Park Gardens and St. John's Wood Church Grounds in the north, to Victoria Embankment Gardens and Soho Square in the south. Of these 109 sites, 56 are parks, gardens or open Spaces. The remaining sites are ones where we maintain the horticultural element on behalf of other council departments. Some of which are extremely high profile, such as Leicester Square, Soho Square, Hyde Park Corner, Marble Arch and Victoria Embankment Gardens. Many of the Central London parks experience a huge volume of users throughout the day by office workers and tourists.

Working in Westminster can be challenging with the high level of congestion on the roads and the large number of people using the parks. Work has to be meticulously programmed and carried out to a very high standard. We also gained the grounds maintenance and management of their three cemeteries which are situated outside the City in Hanwell, East Finchley and Mill Hill. A feature of the new contract was the introduction of Westminster-branded uniformed, constant patrol staff. This has resulted in a more visible presence whilst on site, been easily identifiable by the public. This has helped when dealing with unsociable behaviour, the uniform identifying the staff as being in charge of the site.